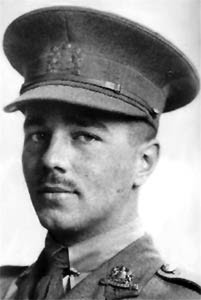 Bent double, like old beggars under sacks,
Knock-kneed, coughing like hags, we cursed through sludge,
Till on the haunting flares we turned our backs
And towards our distant rest began to trudge.
Men marched asleep. Many had lost their boots
But limped on, blood-shod. All went lame; all blind;
Drunk with fatigue; deaf even to the hoots
Of disappointed shells that dropped behind.

GAS! Gas! Quick, boys!-- An ecstasy of fumbling,
Fitting the clumsy helmets just in time;
But someone still was yelling out and stumbling
And floundering like a man in fire or lime.--
Dim, through the misty panes and thick green light
As under a green sea, I saw him drowning.

In all my dreams, before my helpless sight,
He plunges at me, guttering, choking, drowning.

If in some smothering dreams you too could pace
Behind the wagon that we flung him in,
And watch the white eyes writhing in his face,
His hanging face, like a devil's sick of sin;
If you could hear, at every jolt, the blood
Come gargling from the froth-corrupted lungs,
Obscene as cancer, bitter as the cud
Of vile, incurable sores on innocent tongues,--
My friend, you would not tell with such high zest
To children ardent for some desperate glory,
The old Lie: Dulce et decorum est
Pro patria mori.

Wilfred Owen was born in 1893 to a middle-class family in Oswestry in the North of England. Two years later, Owen's grandfather, the financial mainstay of the family, died almost bankrupt. Owen's parents had to move into rented accommodation in the more urban area of Birkenhead. His mother, in particular, resented the family's loss of financial security and its outward signs of gentility.

Owen began to read and write poetry as a child, and, following his mother's interest in religion, started to read the Bible on a daily basis. Owen's family could not afford to send him to public school. Nor, when he failed to win an academic scholarship to the University of London (not as socially or intellectually exclusive as Oxford or Cambridge) in 1911, could they afford to pay for a college education.

Owen thus had to find an occupation suitable to a young man of his class. In 1911, he moved south to the village of Dunsden, near Reading, where he worked as a lay reader (an assistant to a clergyman) until 1913. He attended classes part-time at the University of Reading but, despite encouragement from the head of the English department, he again failed to win the scholarship that would have financed full-time study.

After falling ill in 1913, he decided to work as a private teacher, a profession which required little formal training and which would not compromise his, or his family's, social status. He traveled to France, where he worked until 1915. Just after the outbreak of the war, he wrote to his mother, "While is is true that the guns will effect a little useful weeding, I am furious with chagrin to think that the Minds which were to have excelled the civilization of ten thousand years are being annihilated - and bodies, the product of aeons of Natural Selection, melted down to pay for political statues." (Quoted in Jon Stallworthy, Wilfred Owen: The War Poems (London 1994), p. xxiv)