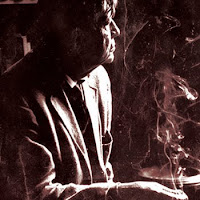 “All sin tends to be addictive, and the terminal point of addiction is what is called damnation.”
- Wystan Hugh Auden (21 February 1907 – 29 September 1973)
W. H. Auden was born in England in the city of York (not all that far from where this author sits now) in 1907 and would become one of the most influential poets and greatest writers of the 20th century. Auden grew up reading all subjects equally; science, philosophy and literature and thus spent his first year at Christ Church, Oxford studying biology until he switched to his true calling, English, in his second year. Eventually he came down from Oxford with an unspectacular third class degree (not a first showing his natural flare and lightning mind, nor a fourth showing contempt for the examinations) and spent time in Berlin, indulging an interest in the still fresh work of Freud, before returning to England to teach English.

In 1937 Auden went to volunteer for the Republic in the Spanish Civil War where his closely held left-wing views were forced to mature by the realities of war, though he would always remain staunchly on the left. More war was to come, of course, and in January 1939 Auden went to live in New York, becoming a US citizen in 1946, which was seen by British critics and readers alike as something of a betrayal and his reputation suffered for many years. Between 1956-61 Auden returned England, however sporadically, to fulfil his duties as Professor of Poetry at Oxford, something of a sign of forgiveness and a recognition of his status as a literary great, while wintering still in New York and summering in various parts of Europe (he was only required to give three lectures a year). Auden moved to Oxford permanently in 1972 and died in Vienna in 1973.
Auden was a prolific writer during his 66 years (about 400 poems; his Collected Poems is around 900 pages) though many critics feel that his work after 1939, after he had left Britain for America, never reached the heights he had previously scaled due to intentional over-intellectualism and simply failed to touch our imaginations in the same way. It is certainly possible that the tumultuous events of the first half of the 20th century sparked a perfect synergy within Auden that produced his best work but this author refuses to write-off his later work: About the House (1965) is a masterful exploration of each room of his Swiss chalet (including the lavatory) and associated memories through poetry. 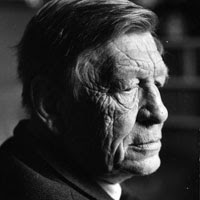 His early work was heavily influenced by T. S. Eliot (who was involved in Auden’s first published works at Faber) but his influences were extremely broad including Thomas Hardy, Gilbert and Sullivan, Dante and Pope, as well as Old Norse ballads and heroic poems. A young poet searching for inspiration or guidance on subject matter or form should toss out all their ‘How to’ guides and look no further than the poems of W. H. Auden; his styles and forms run from the quatrain to haiku, couplets to verse letters. Furthermore, his subject matter not only ran the whole gamut of human emotion but delved into history, current events (of the time) and the lives of great writers. In short he is, in this author’s opinion, a poet for all seasons.
Notes and asides:
- During his lifetime Auden counted among his lovers novelist Christopher Isherwood (A Single Man) and composer & conductor Benjamin Britten (operatic adaptions of Billy Budd and The Turn of the Screw etc.).
- Auden shared a passion for the Icelandic sagas with his friend and fellow Oxford professor, J. R. R. Tolkien, whose ‘Lord of the Rings’ trilogy he also greatly admired; - indeed, an interest in these sagas was deemed by Auden to be an essential quality of a writer (!). Auden did not, however, share Tolkien’s devout Christian faith.
- Auden had a resurgence of popularity in the 1990s when his poem ‘Funeral Blues’ was read at the funeral in the popular film Four Weddings and a Funeral (1994).
Key collections:
Look, Stranger! (London, 1936; US edn., On This Island, New York, 1937)
About the House (New York, London, 1965)
Key poems:
Taller Today, we remember similar evenings (1928)
Lullaby (1937)
Musée des Beaux Arts (1938)
September 1 1939 (1939)
In Memory of W.B. Yeats (1939)
Further reading:
Collected Poems (1994) edited by Edward Mendelson
W. H. Auden – A Biography (1981; new ed. 2010) by Humphrey Carpenter
NB: The title of this piece ‘The Addictions of Sin’ is also the title of a very fine BBC documentary about Auden, which can easily be found on YouTube.

This piece on W.H. Auden was written by Jacob Knowles-Smith, an enthusiastic and always helpful supporter of Poets United. If you would like to learn more about Jacob you can do so by checking out his “The Life of a Poet” interview (found here on Poets United) or by visiting his poetry blog First Boredom, Then Beer. Jacob will be regular writer in the Poet History series so expect more of his insightful and informative writing to come.
Posted by Poets United