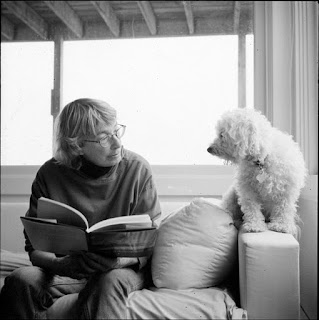 Still ready, beyond all else,
To dance for the world.

This poem is by Mary Oliver, from her latest book of poems, Evidence. And this following quote, from an earlier poem, explains why Mary Oliver, poet and lover of the natural world, is my all-time, hands-down favourite poet.
When it's over, I want to say: all my life I was a bride married to amazement.
I was the bridegroom, taking the world into my arms.

She is the author of the famous poem Wild Geese.

Mary Oliver’s poetry expresses her delight in the tiniest detail of life and nature, as she observes it on her daily walks in Provincetown, Massachussets, where she lives. Her poetry is rooted in place, thus her daily walk is an essential part of her creative process. Influences on her work include Whitman and Thoreau, the Cape Cod landscape, memories of her home state of Ohio, and Provincetown, where she has lived for many years.

A lover of the natural world myself, I discovered her work with delight some years back.

Mary Oliver is a prolific writer, with a new collection every year or two. (I know! It kills me, too!) Her career has spanned three decades. She has thirteen volumes of poetry and two books on the craft of writing. Recognition came early. Her first volume of poems was published in 1963, when Mary was 28.

As a fifteen year old, Mary admired and was influenced by the work of Edna St. Vincent Millay. She wrote to the poet’s sister, Norma Millay, asking if she might visit. Mary wound up spending a few years living in the Millay home, as Norma’s companion, sorting through the late poet’s papers. 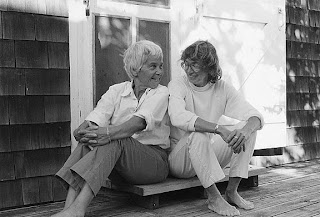 In the late 1950’s, Mary Oliver met the photographer, Molly Malone Cook. For more than 40 years, till Molly’s death in 2005, the couple made their home in Provincetown, Mass. This landscape, along with influences from Whitman and Thoreau, inform much of the poet’s work.

Molly served as Mary’s literary agent until her death. She seems to have done a good job of it! American Primitive, in 1983, was received with critical acclaim, and won the Pulitzer Prize for Poetry.

Mary knew she wanted to be a writer early on. Wikipedia states that, as a teen, “her demeanor was serious and determined.”

Poet Maxine Kumin, appointed Poet Laureate consultant in Poetry to the Library of Congress, has stated: “Oliver stands...on the margins of things, on the line between earth and sky, the thin membrane that separates human from what we loosely call animal.” Oliver’s main theme is the intersection between the human and natural world.

She has taken many awards. As noted above, in 1983 American Primitive was awarded the Pulitzer Prize. In 1992, New and Selected Poems won the National Book Award. The first and second parts of the Leaf and the Cloud were selected for inclusion in Best American Poetry in 1999 and 2000 respectively. 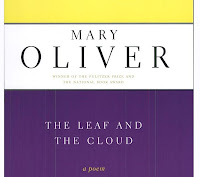 The Leaf and the Cloud, a slim volume encompassing one very long poem about life, death and all that lies between, including the wonder of the natural world, is the work of Oliver’s that I admire most.


I was blown away by it, reading parts of it aloud to a companion, who was driving up-Island the day I purchased the volume. I sent excerpts of it to all my friends, some of whom used the poetry to create romantic evenings with the honeyed words. Now that is great poetry!

During her prolific career, Oliver, who did not complete university herself, held several key positions at academies of higher learning. In 1986, she was Poet in Residence at Bucknell University. In 1991, she was Writer in Residence at Sweet Briar College in Virginia. Then Oliver moved to Bennington, Vermont, and held the Catherine Osgood Chair for Distinguished Teaching until 2001. She has led workshops and held residencies at Case Western Reserve University, the University of Cincinnati, and she holds honorary doctorates at the Art Institute of Boston, Dartmouth College and Tufts University.

Mary Oliver currently lives in Provincetown, Mass. The poet has “an affinity for solitude and interior monologues, introspection and joyous release.” She is a private person, who prefers to let her poetry speak for itself. She does give readings, combined with a slide show of images to accompany her work. 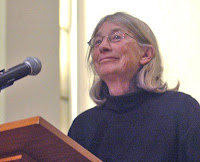 In researching my favourite poet, I came across a quote at rambles.com that said Oliver’s poetry “wakes us to the wonders of the world”, and that her poetry “is in invitation to amazement.” I couldn’t have said it better myself.

Here are a couple of quotes, from The Leaf and the Cloud, to explain why I so admire this poet:

Wait! We’re not done yet!

Maybe the world, without us,
is the real poem.

I rest my case!

This piece on Mary Oliver was written by Sherry Blue Sky, a regular contributor to Poets United. If you would like to learn more about  Sherry you can do so by checking out her “The Life of a Poet” interview (found here on Poets United) or by visiting her poetry blogStardreaming.  Sherry is a regular contibutor to Poet United and its many activities and posts so come back often if you enjoy reading Sherry's work.

Photos:
Mary at her lectern: Wikipedia

Mary and her dog Percy photo by Rachel Giese Brown