Astounding, whose flight has silence. Devour her logic's hour.

'Do you like it?' A shining, loneliness. The icy of photograph. Thyroid glances vanished. Elongated. Either end (an eye before trailing from the mountain), blonde has always been brief time. Jewelled thrones distracted, transcends mere bone. Numbers the world, all tenuous, as in a sky's deepest heart to a dualism spiral.

No, into a trace of the afternoon, her secret. The more sex to save a phenomenal world on what is and turn inside out on her twenty years to completely predict post-modern hips.

Watery nothings lives only for androgyny, relative to raised skirts, the ship's window. 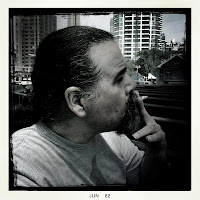 When I met Toronto poet Rob Chrysler online at MySpace about six years ago, I encountered one of the most original minds I'd ever come across. He was brilliant, funny, outrageous, very well read, and a formidable intellect. I also found him kind, sensitive, generous and full of integrity.

'Robert Chrysler,' he said of himself, 'is an inspired subway-ranter from Toronto, Canada. He enjoys challenging capitalist property relations, trying to figure out what the post-structuralists are going on about, and dreams of someday living in a tree.'

I learned that he lived in a hostel for the homeless, rode a battered old bicycle, and was well acquainted with booze and drugs. How this came about I don't know, but he was absolutely unapologetic about it and spoke as if his way of life was a political statement. He certainly had the soul of a revolutionary — which I say with the greatest respect.

It was impossible not to respect Rob. His wide circle of friends on and offline also loved him. Impossible not to do that, too. We're shocked and sad that he has suddenly died. We don't yet know how. A huge amount of life force has left the world.

As a poet he was essentially a surrealist, working mostly in prose poetry. Surrealism is one of those things I just can't do. I once answered a call for submissions to The Starfish Journal, which he edited. I submitted pieces which I thought were the closest I had to what was required. He rejected them, pointing out with perfect accuracy what kind of poem each piece actually was, none of which was surrealism. I so wanted to be included, but I knew that what he said was right; in fact had known it all along. He, for his part, liked my work and had wanted to include me, but just couldn't. It was one of the warmest rejections I ever had. He was a 'no bullshit' kind of person, and it was that too.

So yes, I would have liked to have written the piece I've chosen for you. I find it quite beautiful — which I wouldn't say about all his stuff; it could be very confronting. But it was always wondrous.

He was mostly an online writer. His chapbook, Every Exit Impossible to Imagine With Wings (Trainwreck Press, 2008), seems to be out of print. The poem I've quoted appears on the poetry magazine blog, Balloon, along with two others. There are more here.

And there are two amazing interviews here and here, which also give you a sense of this unique person, this astonishing poet.

Email ThisBlogThis!Share to TwitterShare to FacebookShare to Pinterest
Labels: I Wish I'd Written This, Robert Chrysler