Against the level sun and the screech of brakes
through porous sheets of blindness I gripped
the wheel and stopped above the great plain
till I saw him kindle the reefs of cloud
over the western ridge. Then, wire-strung,
set in the rim of the embankment down
the tumbling hill, I saw the dragon's teeth
flash past against the fired sky.
Fence-posts, I thought: in dreamy lands
the reading of signs is unprofitable.
Yet in the nursery the monster sleeps.
He sighs and heaves oozing a greenness past
this green, where magic sword and holy spear
glint still unread in the flight of birds,
in the prophetic guts of oxen.

Children,
please don't retreat behind this sunset
yet. I carry the pterodactyl in the van,
the flying spider, bats big as babies.
Tyrannosaurus himself wanders about
bigger than old whales grazing across
the frozen seas, than tanks on the doorstep
of Nicaragua. Saw him through misty glass
this morning stalking the towns in the hills
when shivering just out of frosty night
I prayed until the sun who flickered in the woods
crept up the flanking conifers and hit the top
with a crash of cymbals.

Night is falling
forever now over the roads in the North
of New South Wales. The blue-bright waters
of an undying day are seeping through
into perplexing memory. Scouting beams
sculpt shapes ahead from shifting shadows,
furbish up idols out of secret time
that rush surprised along the edge of light
back into populous darkness. This trip
is endless, the compass irrelevant. My riches
are now fetched by maps beyond the truth
of geography and the attraction of the poles.

(from the book Falcon Drinking) 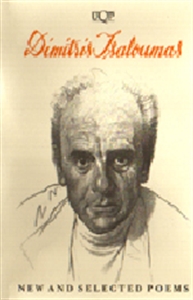 Multi-award winning Greek-Australian poet Dimitris Tsaloumas has lived in Melbourne for 70 years. He received a BA from the University of Melbourne and then worked as a teacher of English and modern languages. He retired from teaching in 1982.

As a very young man he took part in the Resistance during the German and Italian occupation of Greece.

Although he left Greece in 1951 for political reasons, he has been able to spend much time there in later life.

The author of numerous poetry collections, he writes in Greek and English and is highly regarded in both countries. When I knew him he was something of a mentor, in an informal capacity, to younger poets including me.

The Australian Poetry Library says of his work:

While Tsaloumas’s poetry is formally highly structured rather than experimental, his themes range from the classical to the contemporary.

In Tsaloumas' work Hellenic traditions are reflected in highly structured and formal poetry ranging from the elegiac to the sardonic. While regarded as the paradigmatic voice of the poet in exile, more precisely of the Greek diaspora, Tsaloumas perceives himself rather as an Australian-Greek writer. He reflects a classical poetic tradition, presenting a medley of voices, a cast of commentators on modern society. His work transcends the personal and the political and is quite distinct from accounts of migrant experiences which catalogue the minutiae of the struggle for survival.

His books are available on Amazon and you can read a large number of his poems here.

The poem I've chosen for you is from one of his earlier books. I like it because I'm well acquainted with the landscape described. In fact I live in the north of New South Wales. In Australia, travelling north implies Queensland (which involves travelling through NSW). When I still lived in Melbourne, I made that long car trip several times. This ancient country, especially at night, does feel both vast and primitive, as the poem suggests — thrilling and somewhat scary.  Perhaps it is natural that it took the fresh perspective of a migrant to see this so clearly and express it so well.

Email ThisBlogThis!Share to TwitterShare to FacebookShare to Pinterest
Labels: Dimitris Tsaloumas, Falcon Drinking, I Wish I'd Written This