The sea sucks at its own
edges, in and out with the moon.
Tattered brown fronds
(shredded nylon stockings,
feathers, the remnant of hands)
wash against my skin.

As for the crab, she's climbed
a tree and sticks herself
to the bark with her adroit
spikes; she jerks
her stalked eyes at me, seeing

a meat shadow,
food or a predator.
I smell the pulp
of her body, faint odour
of rotting salt,
as she smells mine,
working those martian palps:

seawater in leather.
I'm a category, a noun
in a language not human,
infrared in moonlight,
a tidal wave in the air.

you're no-one's metaphor,
you have your own paths
and rituals, frayed snails
and soaked nuts, waterlogged sacks
to pick over, soggy chips and crusts.

The beach is all yours, wordless
and ripe once I'm off it,
wading towards the moored boats
and blue lights of the dock.

'Landcrab I' is a magnificent poem too — but somewhat more metaphorical and philosophical. I love Landcrab II's greater focus on external observation (though both poems have both aspects) and I admire the wonderful creation of atmosphere. 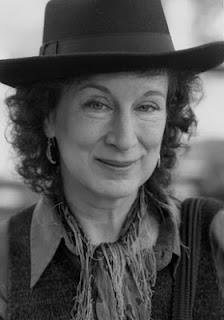 Wikipedia, PoemHunter and other online sources note that Margaret Atwood is 'a Canadian poet, novelist, literary critic, essayist, and environmental activist. She is among the most-honoured authors of fiction in recent history; she is a winner of the Arthur C. Clarke Award and Prince of Asturias award for Literature, has been shortlisted for the Booker Prize five times, winning once, and has been a finalist for the Governor General's Award seven times, winning twice.' (Which perhaps you didn't need to be told, as she is deservedly famous.)

Wikipedia adds, 'She is also a founder of the Writers' Trust of Canada, a non-profit literary organization that seeks to encourage Canada's writing community.'

She is of course best-known for her many novels — literary works which sell! Those I've read I have found intriguing and satisfying. She is a prolific poet too; and she has also written in other genres such as essays and children's stories. A complete list of her writings appears at her official website, and at the end of the list is a link to check out audio versions of her works.

She has both novels and poetry collections available on Amazon, and you can read more of her poems at PoemHunter.

Email ThisBlogThis!Share to TwitterShare to FacebookShare to Pinterest
Labels: I Wish I'd Written This, Margaret Atwood, True Stories