I am waylaid by Beauty. Who will walk
Between me and the crying of the frogs?
Oh, savage Beauty, suffer me to pass,
That am a timid woman, on her way
From one house to another!
- Edna St. Vincent Millay
As I have written elsewhere , all my favorite poets begin with the letter “E”, and of these, Edna St. Vincent Millay is one of the finest. I first became mesmerized by the persona of Millay upon reading Savage Beauty, The Life of Edna St. Vincent Millay by Nancy Milford. A spellbinding read that leaves you feeling you have just watched her life portrayed before your eyes in classic black and white film. It is precisely why I chose Millay as the first of poets to write about at Poet’s United. 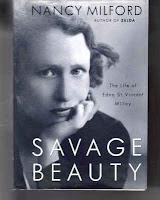 Born Edna Vincent Millay February 22, 1892 in Rockport, Maine she was the daughter of Cora and Henry Millay. She was the oldest of three daughters that Cora would come to raise mainly on her own. Edna was followed in by Norma, then Kathleen , Edna being not only the eldest she was the most beautiful taking after her father who was quite a handsome man. In the early years the girls and their mother lived as nomads after Cora divorced Henry for financial and abusive reasons. Finally they came to settle into an aunt’s home in Camden, Maine where Edna first began to write. Left alone most of the time while their mother worked to support the girls their imaginations had the ability to run wild in the fields around them presenting a perfect background to paint poetry . Cora was a proclaimed suffragette and instilled within her girls both the ideals of independence and feminism. This is reflected in Edna almost immediately as in her early years she added to her middle name St. (Vincent) being the full name of the hospital where her Uncle Charlie was saved from dying shortly before she was born. Her mother would say of her name “her name reads as a song.” In her early years she came to insist on being called Vincent and began signing all her personal letters using it in some form.

Cora kept her girls from as much pain and sorrow as she possibly could even changing the ending to popular fairytales to ensure life a happy ever after. She read to them as much as time would allow, insisting their minds be filled with the readings of Shakespeare and the classics, this alone must have played a large part in igniting the flame of passion that Edna would set to paper throughout her life, not only in her poetry, but drama and screenwriting. This passion however, would not confided itself to writing alone as the youthful years turned to womanhood and eternal love for all things romantic.


It was in 1912 when she entered a poetry contest for The Lyrical Press that she gained her first status as literary celebrity. Though she placed fourth overall there was such uproar even by the first and second place winners both agreeing that the judges undeservingly handed them the prize when Millay hands down should have be the recipient of the honor. Not long after the controversy Caroline B. Dow heard Millay recite the piece at the piano and was so impressed with the young woman she offered to raise the money to pay for her education in full at Vassar in New York.


This piece of work was just the beginning of the genius this nineteen year old women was holding ready for presentation to the world.

Excerpt from Renascence by Millay 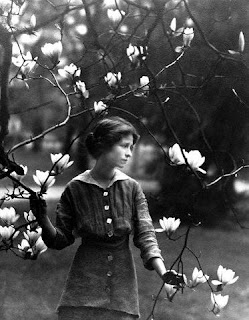 The complete reading of Renascence can be heard through various sources on the internet.  I highly recommend listening to the piece in full which takes approximately ten minutes for a complete reading..


Always a feminist and a true beauty physically and poetically she lived life to its fullest taking many lovers male and female opening expressing her bisexuality throughout her life.   Many of her poems and sonnets are  directly written to and about her various loves throughout her life from Greenwich Village, where she lived after her graduation from Vassar as a bohemian poetess, to the lover (Charlie Ellis) she held dear even after her marriage to Eugen Jan Boissevain.   She married Eugen in 1923 he being a wealthy  widower  to a close friend of Edna’s.  Eugen and Edna were equals in their views on feminism and personal freedom allowing each other that freedom even to taking other lovers during their marriage of twenty-six years.   But 1923 was not only the year she married it also came to be heralded the year she would win the Pulitzer Prize for Poetry for her poem, The Ballad of the Harp Weaver.    Edna St. Vincent Millay would be the first woman to be awarded this honor - she had fully arrived as a poet of the highest caliber.   Her fame traveled throughout the literary world  and would only be challenged by her  pacifist views that were highly criticized for the stand she took on World War II. 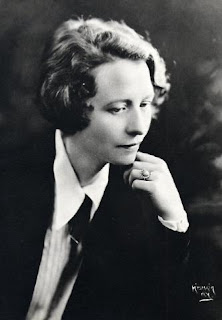 I have only slide across the surface of the complexity held by this poet who took the world by surprise and fell in love with all of it. I do sincerely recommend that one take the time and listen and read, but first to listen to readings of Millay’s poetry which are music to the ear. There are several beautiful readings that will have you asking for more and send you off to find out as much as possible about this poetic soul. I will leave you with a sonnet of Millay’s written towards the end of her life – as Renascence with its budding cry out for more life symbolizes its beginning dance – This Sonnet XLIII….”What lips my lips have kissed, and where, and why.. .” sums up the seasons of her life.. ….that the world is so blessed to have shared with her …..and can still enjoy years later…. bkmackenzie…
What lips my lips have kissed, and where, and why,
I have forgotten, and what arms have lain
Under my head till morning; but the rain
Is full of ghosts tonight, that tap and sigh
Upon the glass and listen for reply,
And in my heart there stirs a quiet pain
For unremembered lads that not again
Will turn to me at midnight with a cry.
Thus in winter stands the lonely tree,
Nor knows what birds have vanished one by one,
Yet knows its boughs more silent than before:
I cannot say what loves have come and gone,
I only know that summer sang in me
A little while, that in me sings no more.


This piece on Edna St. Vincent Millay was written by bkmackenzie, a regular contributor to Poets United. If you would like to learn more about  bkm you can do so by by visiting her poetry blog Signed .....bkm.  bkm is a regular contibutor to Poet United and particpates regulary in our activities.  If you enjoy reading bkm's work please stop back in to see her latest contibution.
Posted by Robert Lloyd