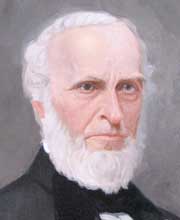 John Greenleaf Whittier, known as The Quaker Poet, The Slave Poet and The Fireside Poet, wrote from the time he was a child until he died at 85. A Quaker devoted to social causes and reform, Whittier worked for years as an editor and writer at a series of abolitionist newspapers and magazines. Additionally, he was a politician and abolitionist, opposing slavery before it became the divisive subject that resulted in civil war. Most famous for lengthy works, such as the oft-referred-to poem, Snowbound, Whittier occasionally wrote shorter pieces like Forgiveness, below.

My heart was heavy, for its trust had been
Abused, its kindness answered with foul wrong;
So, turning gloomily from my fellow-men,
One summer Sabbath day I strolled among
The green mounds of the village burial-place;
Where, pondering how all human love and hate
Find one sad level; and how, soon or late,
Wronged and wrongdoer, each with meekened face,
And cold hands folded over a still heart,
Pass the green threshold of our common grave,
Whither all footsteps tend, whence none depart,
Awed for myself, and pitying my race,
Our common sorrow, like a mighty wave,
Swept all my pride away, and trembling I forgave!

After reading this anew, I cannot help but hope that each of us experiences the same epiphany.  ~Kim