Going to Meet Her Lover

It sings. Everything,
Sun, wind, these pavements,
This old wall protesting
Every woman
Has the right to choose.
I've chosen you
For life, my body sings
Its forty years and I'm
Nineteen, and a man passing
Shows it with his eyes.
In five minutes you'll clasp me,
Claim me. These loose clothes
I wear because you like them
Stream on the wind. 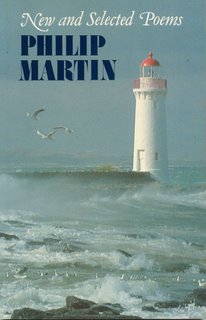 I think it's remarkable that Philip, a heterosexual man, could so well imagine himself into the head of the woman speaker of the poem. I, who am a woman, would like to have written so beautifully and authentically of this experience.

I knew of Philip's work, and admired it, long before I met him in person. Eventually we worked together in the Melbourne Branch of the Poets Union of Australia, and in the publishing cooperative Pariah Press. We became great mates, and it was a shock to learn of his death.

I have recounted a little of our friendship at my SnakyPoet blog, where I have also posted a eulogy by his partner Jenny Gribble, which tells a great deal more about him. You can find other links there too, to what other online material exists. A few of his books are on Amazon and at Abe Books. But there are other Philip Martins, so check the list of his books in the Wikipedia entry (at the link on his name, above).

Unfortunately some online poems by a Philip Martin are (to anyone who knows his writing) obviously by one of the others, and do not compare. So I'd better give you something else here and now.

Here nothing stands between you and the wind.
Wind and sea. For twenty years I've come
Back here from cities that I love. Tonight
In Seacombe House again, I hear the gusts
Beat at the walls, and the sea's loud. Both call me
Out to walk. The pines in Sackville Street
Vie with the roar from the East Beach, the South Beach.
Behind me the ancient ship lies in its dunes.
I face into the south, the solid dark
Beyond the last street lights: imagine the first
Light struck here by European hands
To glimmer in a window, solitary
Across the blackness of new land, old land:
Small, impertinent, almost swallowed up.

'It is good also to be poor, and listen to the wind.' *
Ten winters back, weak from the flu, I came here
With a line from a poem echoing inside me.
Upstairs in this old house I saw the streets
Shining black with rain. No one about.
Switched off the radio, wanting not even Mozart:
'It is good also to be poor.'  Voluptuous
Austerity. No human sounds. I listened:
Unbroken roar from the East Beach. Then, closer,
More intimate, new rain against my window.
And lay down, sure of healing. Sleep, wind, sea.

*From Robert Bly's 'Poem against the British'.

(Port Fairy is a coastal town south-west of Melbourne. The book cover shown above uses a photo, by Avis Quarrell, of the Port Fairy lighthouse.)

Email ThisBlogThis!Share to TwitterShare to FacebookShare to Pinterest
Labels: I Wish I'd Written This, Philip Martin