from Stones of the Sky

The lichen on the stone, green
elastic creeper, entangles
the primal hieroglyph,
stretches the sea's
scripture
around the round rock.
The sun reads it, barnacles fade it,
and from stone to stone
fish slither by like shivers.
Silently the alphabet goes on
spelling out its sunken syllables
along the immaculate lip of the coast.

On his loom the moss weaver
goes back and forth, higher and higher,
carpeting caverns of air and water
so that no one dances but the wave
and nothing follows but the wind.

Rolling from lake or mountain edge,
the stone, round volcanic
daughter, snow dove,
left its shape behind
tumbling toward the sea,
its fury spent along the way.
The boulder lost its sharp-peaked,
short-lived landmark
that like a cosmic egg
was swept into the river where
between other stones, it kept on rolling,
its ancestor forgotten,
far from the hellish landslide.

This is how, sky-smoothed, it arrives
at the sea: perfect, worn down,
renewed, renowned:
purity. 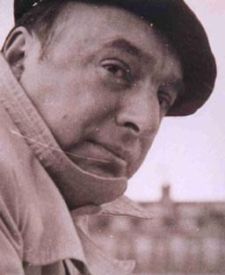 Stones of the Sky (Las piedras del cielo) is presented as a book-length poem in sections, or a series of connected poems on one theme. Many of  them are about specific stones: agate, emerald, lapis lazuli, chalcedony....

It's Neruda — they're all beautiful. These two consecutive pieces, which go together so perfectly, I love above the rest because of the way the luscious words seem to roll around the mouth, even when you don't speak them aloud. I could wish, too, for Neruda's gifts of imagination!

I sometimes think he must be everyone's favourite poet, and deservedly so. This volume was published late in his life. The translator, in his Introduction, opines that it is not so well known as his love poems and political verse. It's available from Amazon in a bilingual edition. A review there says:

This suite of thirty poems is Neruda's last love song to the Earth. When he wrote these poems he was dying of cancer, and as the title suggests he addresses not ordinary stones, but cosmic ones: stones that reconcile immobile permanence and the clarity of spiritual flight. When the poet meets his crystallized self, the encounter "takes on an eerie brilliance"—The Village Voice.

You can find other volumes of his poetry at Amazon's Neruda page. You can also read his work at PoemHunter. Enjoy!

Email ThisBlogThis!Share to TwitterShare to FacebookShare to Pinterest
Labels: I Wish I'd Written This, Pablo Neruda, Stones of the Sky