flowing in the hut's
gate...
the Milky Way

sound asleep
there is peace on earth...
pond snail

on one side
snow falling, the other
spring rain!

with the dripping
of paper umbrellas...
spring mist

the lover cat
his face so alert
comes home

through green bamboo blinds
a pretty woman
in white

birdsong in bamboo grass--
too shy
for the fence

a fresh-made dewdrop
is cool too...
moon at the gate 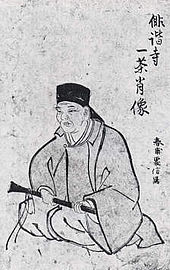 Or I should say, I wish I'd written these, as they are not one poem but separate haiku. I subscribe to a site called Daily Issa, and receive one in my email inbox every day. These are a random selection of some recent arrivals.

Issa is considered one of the four great Japanese haiku masters, the others being Basho, Buson and Shiki. Haiku juxtapose two images, and the poetry is supposed to happen between or outside the words, like an 'aha!' moment. These four men were indeed beautiful exponents of the art. My favourite is really Basho, whose work is  probably the most quoted, but I love them all. In Issa I particularly like a sort of quirkiness, and the way he often includes people in these nature poems, placing humanity as part of nature, equal to (not greater or lesser than) other living things. As well as a poet, and an artist whose sketches often accompanied his haikiu, he was a lay Buddhist priest.

You can find more of his work here and here. (If you Google, there are yet more places.)

Also David Lanoue has recently released a new book: Issa's Best:  a translator's selection. And for practical reasons a selection is all it can be: in his 64 years Issa wrote over 20,000 haiku! It's available in print and also in both a Kindle edition and a Nook edition.

(You will note that they are not in lines of 5/7/5 syllables. I don't speak or read Japanese, but those who do say that our syllables are much longer than Japanese. Therefore contemporary haikuists writing in English now tend to try for greater brevity than 5/7/5. Some like to use short/long/short lines; others ignore line length, making the images paramount. Lanoue's translations can go either way.)

The Daily Issa site has moved and become a Yahoo group. (The link above takes you to an archive.) If you wish to receive the daily emails, go here to join.