That time in a ring of grass,
when I thought you were the sky.
That other time,
dawn haloing your hair.
That time when you were
dark wine, hot on my lips.

Now you are gray and thin.
I am graying and not thin.
I stumble on my words,
you talk too much too fast,
we are jumpy and abrupt
as though we have just met.

So many years to make some
sense of love, and we are no
nearer. But we know something,
dear heart, despite the years
and distances between us.
And what is that? Ah, ah,

as you would say. Ah, ah. Words
fail. There is no name for what
we are, for what we know of love
and of each other. We pass like comets
through each other's lives, leaving no trace
except brief rituals of arrival and departure.

So let us celebrate those rituals again,
my dear, for time grows short and dangerous,
my love, my ancient friend, and one day
there will be no trace of any of those times
we spent, though other lovers will come
to stumble wondering and wonderingly in our wake.

From Seasons of the Witch: Poetry and Songs to the Goddess. 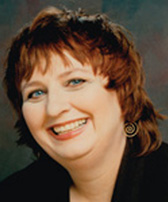 I've just discovered this wonderful poet. I was visiting a friend, saw the book, browsed, and was electrified. Then my friend told me she was re-reading it, as Patricia Monaghan had just died — on the 11th of November. Various sites mourning her online reveal that it was after 'a two-year journey with cancer'.

She is described as, 'scholar, author, poet, activist, artist, visionary and vice-president of the Association for the Study of Women and Mythology'. Her Amazon author page says:

Patricia Monaghan, Ph.D., (born 15 February 1946) is one of the pioneers of the contemporary women’s spirituality movement. She is the author of more than 15 books of poetry and nonfiction, including the two volume Encyclopedia of Goddesses and Heroines. She lives in Black Earth,Wisconsin (although she holds dual Irish and American citizenship), where she and her husband Michael McDermott tend a vineyard and large organic garden. She is also a wine expert, and author of Wineries of Minnesota and Wisconsin. She is a founder of and Senior Fellow at The Black Earth Institute, connecting earth, spirit and society through the arts.

It's obvious via the numerous online references that she was influential and much loved. I found this statement by her, which I like:


The artist can be seen as part of the commercial world, with success evidenced by money and fame.  Alternatively, the artist can be seen as practicing an oracular profession, drawing attention to the relationship between humanity and the other-than-human world.  Today, it is important for artists to choose the second role and to express the realities of our complex and interconnected natural world.

She herself certainly lived up to that!

Her website lists her books and other writings, both prose and poetry, and you can find them for sale on her Amazon page. Seasons of the Witch, which comes with a CD, is reviewed here.  Her online works are listed here, and there are more here and here. The last link includes Patricia reading her work. She was interviewed on the subject of war, and this interview — interesting reading for its own sake — also contains the full texts of several of her poems.

And who is The Hag of Beare? Seasons of the Witch contains notes on the poems, and the note on this one says:

In Irish her name is Cailleach, "the veiled one." She is one of the oldest goddesses of Ireland, probably reaching back to the pre-Celtic period. In historical literature she appears as a woman who grows young every time she meets a man who interests her. But this poem is based upon the famous "Lament of the Hag Beare" in which she speaks longingly of her youth.

Email ThisBlogThis!Share to TwitterShare to FacebookShare to Pinterest
Labels: I Wish I'd Written This, Patricia Monaghan, Seasons of the Witch