(Dedicated to the Born Losers in the Marriage Stakes)

When I was a young maiden,
I was too plain, too clever and too smart.
With boys worthy and eligible —
I just couldn't get a start.

My mother, being more experienced,
more mature and more wise,
To remedy my single status —
Dished up some good advice.

You are not likely to get Prince Charming.
But spinsterhood — it's oh, so dull.
Why then, not settle for some no hoper?
Just to fill in your female destiny's lull.

I got married. To a louse and a weakling,
And life was a hopeless sham.
Till — one miserable, grey morning
A divorcee I became.

There are still some crusty, old boozers!
My mother got a grapevine.
So, why won't I get out and circulate?
And persuade one of them to be mine.

To such a fellow, heavy drinker,
I got married again.
He got killed: in a car accident.
Now a widow I shall remain.

But my mother keeps on nagging:
You're capable, you can earn and save;
Maybe there is still somewhere for you some old man,
With one foot in his grave?


(This one is meant for reciting aloud.) 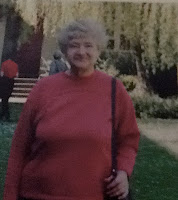 Polish-born Olga Novak, who migrated to Australia in 1952 (after living in Russia, and briefly in Germany) was poet, novelist and film-maker — but best-known as a dynamic performance-poet. This piece, declaimed in her distinctive accent, was undoubtedly the most popular poem in Melbourne in its heyday. Audiences used to chime in gleefully with the chorus.

Unfortunately her books are out of print, and one novel was never published. She wanted me to be her literary executor. Although there was no formal arrangement, Olga's daughter (and heir) approved the plan. My own commitments meant that I have only just created a blog in her name, which starts by showcasing her poetry from The Witch's Coven. My intention is to add some of her prose at a later date.

Olga was not the most literary of writers — although she was well-read — and English was her second language. Nevertheless her work has verve and passion. After a youth of struggle, she had strong opinions and wrote of them fearlessly.

Email ThisBlogThis!Share to TwitterShare to FacebookShare to Pinterest
Labels: Get Married, I Wish I'd Written This, Olga Novak